The last month ended with an exciting performance, where for the first time I worked on a Black background and also destroyed a piece during the performance. The piece I destroyed in some ways felt like a sort of renewal and I then went on to work from Black to colour, and I feel that now I have become a new Tenaebrist. Perhaps more importantly, I have been experimenting with different sounds and sonic variants to produce work. 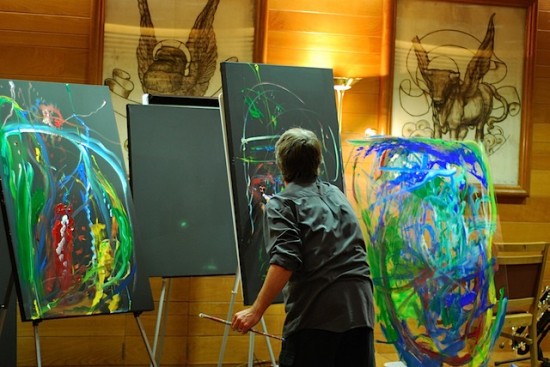 The use of black was influenced by the fact that when I experience colours when listening they appear to float in mid distance and this I thought could be achieved better by using black as a background. I had also been looking at the magnificent black paintings of Pierre Soulages recently and the most effective show I have seen of late was the magnificent Anthony McCall in Ambika P3 which had beautiful light cones in the dark. I have also been looking at the radiant light in nature a lot recently too. Also one of my favourite pieces of music is Charles Ives’s Central Park in the Dark where Colours float and sounds are evoked through the darkness. All these thoughts crossed my mind as I started to lay on marks and gestures to the sounds of the quite extraordinary and spectacular sounds of the Lupophon ( New Bass Oboe) and Tibetan Bowls.

After the performance a member of a largely academic and intellectual audience noted that the Perspex pieces which were painted within a more traditional western manner reminded him of Oskar Kokoshka (whom incidentally I love) whereas the ones painted with Tibetan Bowls contained a Calligraphic element more akin to Eastern art. This has made me since think about how Art History is so ingrained in our brains and to how, although my work is very much tied up with the moment, unwittingly it also carries this weight within.

Speaking of Tibetan sounds I have recently been introduced to the wonderful work of Elaine Radigue, and there has just been a recent festival of her work in London. Some of her work has adventurously taken place in one of my favourite  magnificent London church’s tucked away in the centre of London. This particular one St Stevens Walbrook has an altar by Henry Moore and Kneelers by Patrick Heron. All my performances have been site specific and as you can see in sections of this website have taken place in very differing spaces such as Churches, Cathedrals concert halls, Jazz clubs and Art Gallerys, and I am keen to explore this in a more sonic way in future work, making performances which also become a meditation on the space as well as time.