Last week I became aware of an exciting event via Twitter whereby you could ask a question to an artist. I had received a fascinating response to my question to the artist Marina Abramovich via the Lisson Gallery  about how important time was to her and that she preferred pieces that were tremendously long in duration (the longer, the better. )This week it was the great Artist and filmmaker Julian Schnabel whom I asked if the practice of painting effected the way in which he made films and if the capturing of Time was as important in both. He gave the fascinating reply that “In an excellent work of art, time ceases to matter, and the only time that exists is the time that is IN the work and the time you spend with it…and art (and film) whenever its made, brings you into the present moment you see it. 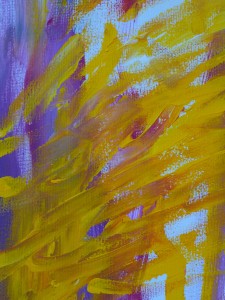 This fantastic piece by the great contemporary composer Edward Cowie, was written for and performed by Christopher Redgate. By painting in performance to this piece I was reinterpreting sounds interpreted from painting.

Last night I went to a lucid and stimulating talk by Eric Clarke who is the professor of Music at Oxford University and I thought about this in connection to when he talked about music’s ability to sharpen our cognitive mind.  Music has the ability to bring us into the moment yet it is all about time.

The capturing of time within a performance is the focus of my work at present I am very aware of this when intensely listning to the complexity of certain music and capturing a colour, shape, gesture or textural quality. When the music has gone what I am left with is the traces of it, yet somehow it exists as something. A great friend and wonderful writer kindly pointed me to a poem about poetry by Wallace Stevens which he was reminded of during a performance I gave recently and the words describe this quality most beautifully.

“An instrument, twanging a wiry string that gives Sounds passing through sudden rightnesses, wholly Containing the mind, below which it cannot descend, Beyond which it has no will to rise.

Be the finding of a satisfaction, and may

Be of a man skating,a woman dancing, a woman combing. The poem of an act of mind.