The Energies of Carolee Schneemann

It is with the greatest of Sadnesses that I learnt recently of the loss of the great inspiration and Artist Carolee Schneemann. I cannot understate what an effect Carolee’s work and her encouragement had on my own progression. Over the past ten years, my art has been evolving and becoming more about performance, my own body and evolving as it has from my own gift of  the  synaesthetic sensory experience of colour via painting, and towards a more personal approach involving my own body via performance and  more broadly speaking, exploring my own vulnerability and own identity through my own work.

At around the time when I was starting collaborative improvisatory performances,  I became fascinated by avant grade developments in painting and performance especially by the Gutai movement and the Vienna Actionists and also with Carolee Schneemann who seemed to cut her own path always inventing and showing the way to go, a bit akin to Miles Davis whom I love. At the time there was very little written about any of these movements or artists. This thankfully has and is changing.

The first time I saw Carolee Schneemann’s work up close was at a glorious exhibition about Dance and performance at the Pompidou Centre, called ‘Danser sa Vie’, which seems a very long time ago, but actually is relatively recent in the progression of life.

Carolee’s work always seemed to resonate so well with all that was happening and developing in my own work. I immediately read the books  “Beyond Meat Joy” and  “Correspondence Course” (Edited by Kristine Stiles) which revealed the huge depth of her work, and the endless energy and collaborations too. I became more fascinated by all of her work spanning, assemblages, film, paintings, performances together with overtly political . Over the years  I was very surprised that despite being so well known amongst so many artists and so very influential, that her work at this time and especially in the UK seemed still largely unrepresented. I then saw more work at a (then small) gallery in London called Richard Saltoun gallery featuring work by largely (at that time) neglected female artists.

I immediately wanted to try and connect with Carolee, and made it a priority,  and managed somehow to obtain her studio e.mail. I cannot recall what I wrote, but I received a quick response I received a very warm response and that she was soon to come to London and perhaps to make contact when she was there.

At this time I was also trying  with the Centre of Visual Music to get together some film showings organised with the University of Oxford of which I am affiliated, and at this time I became aware that Carolee was finishing a film (Breaking the Frame) and hence made enquiries about her perhaps giving a talk about this . Unfortunately and to my great frustration at the time this did not eventuate due, as always I have found to a complete lack of spontaneity and over organisation within the artworld .

However, partly due to my efforts , the Hales Gallery kindly put Carolee and myself in touch . I will always remember the evening when I excitedly picked up the phone and took that call in my studio, as by now she had become an almost mythical, legendary and heroic figure to me. The last time I had that experience was with the artist John Piper, whom I met when I was a young impressionable art student. It was arranged that I would meet her for Lunch the next week between interviews. Amazingly, and incredulously to me,  it was to be the first solo show of hers in a London Gallery. A small show of her wonderful performance and film “Water Light/Water Needle” (a choreographed performance and film), which I particularly love, not only for its imagery, but for the unusual way it mixed music and sound, ( using excerpts of Vivaldi in this case) which I have since found out was in collaboration with the great composer James Tenney. Her collaboration with Tenney  I became greatly interested in, and I always felt that her sensitivity and great knowledge of Music played an important part of a lot of her work. This was proved right when seeing her wonderful retrospective in New York where there were some pieces directly related to pieces of music.

Some People often say that meeting your heroes is often disappointing, but in this case, it was a pure delight. Carolee was gentle, kind and supportive,  sharp, greatly intelligent and clearly had such a broad knowledge and voracious interest in all areas of culture, politics and life. It was easy to talk to her, and I felt a connection on many levels.  We talked of all sorts of things and I got a real sense of not only her love of life but also the great struggle she had experienced through her life and Art interwoven. She was an inspiration.

In the following years and after this memorable and treasured meeting-   we kept in touch. Carolee became a generous mentor and I showed her the first cuts of my latest films and images and she in turn showed me her ideas too, and then a few years ago  I helped with a show of hers,  and staged a performance in part a homage to her work at Reykjavik.  I was delighted to be invited to, and to see the PS1 MOMA show only last year. I found it an especially moving experience, to see all her work finally together in one place and especially in New York. To see all that work together at last was both exciting and awe inspiring. Thankfully, and movingly she finally received the attention that she so richly deserved right toward the end of her life, and after a long struggle with illness.

Her last message (Only a matter of months before she died ) to me was heart warming and typically encouraging and inspiring …I love these works very much….Go Further, follow your energies……. Keep in touch…..( with a lovely picture of her Cat dancing with coloured Ribbons.)

I will continue to follow, be inspired and keep in touch always with the tremendous inspirational energy of Carolee Schneemann which will remain alive to me. 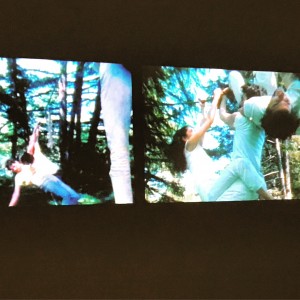