I have been continuing looking at the fascinating correlations between movements in and between art, music and dance and went to the terrific ‘Danser Sa Vie’ show at the Pompidou Centre in Paris where I particularly loved seeing the cross sensory work of choreographer Trisha Brown and Jan Fabre’s powerful piece with a naked dancer covered in Oil, juxtaposed with Klein’s body paintings and  chiming with Pollock filmed by Hans Nemuth. Having the dancer being completely exposed, all  barriers were completely removed between body, movement and process flowing as one.

I have also seen a few terrific shows in London recently. The late Joan Mitchell’s at Hauser Wirth and a great show of Debuffet’s in Waddington’s both, which would have been made even better with a bit of music and sound. Debuffet apparently made music himself collaborating with Asger Jorn. I was talking with the great Art Historian Richard Cork following a talk with him at Wolfson College on the inter-relationship of Music and painting. Someone afterwards mentioned how some of the paintings would have made more sense with music and the idea was floated of showing paintings with music in separate rooms. This I believe has not been explored much. A few years ago I took part in a touring show called ‘Eye Music’ which contained work by Kandinsky, Klee, and more. This could have benefited greatly from some music filtering through the rooms. It would demand a lot of space but would be great I reckon. 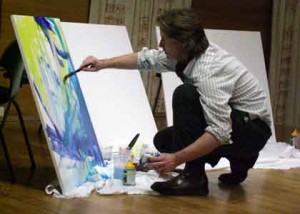 Performance Painting at the Royal Academy of Music to Music by George Crumb.

On a musical note I have been listening to some George Crumb to whose little pieces I painted (See above) to a while ago and of Vlinko Globkar’s fascinating work and I’ve been joyously rediscovering the sensitive afro American improvisations of the 1970’s by artists such as Sam Rivers and Don Pullen. This revolutionary Organic and under sung music sets up huge all encompassing complexities of colour and timbre which really appeals to me.

The other night I became aware about the extraordinary Bowerbirds of Australia, which collect objects of the same colour. I can imagine them flying over those vast distances bringing colours back to their nests. In my studio I find myself over the years doing something similar gathering objects, whether it being flints, album covers and wee boxes. A few weeks ago it was unseasonably warm which meant that in the evenings I could open my studio in the woods and look at it from a far, a bit like when you step back from a painting. This also coincided with the planets Venus and Jupiter being incredibly bright. The light made it almost possible and tangible that the light of my studio and the planets were in some way connected. 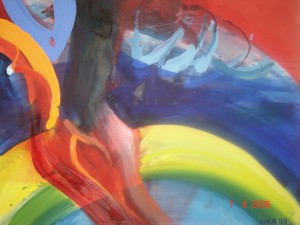 I have been continuing my obsessional fascination with Tarkovsky films too lately and  in particular the magnificent Rublev about the great Russian Painter, and drawing analogies with the poems by the Czech Immunologist turned poet Miroslav Holub. The filmmaker and poet both enable this tangible feeling of tremendous scale, from the particular to the enormous, the microscopic to the grandiose and like the glorious music of Messiaen, in particular the Colours de la Cite Celeste the colour of the particular and the vastness. Through re watching my latest performances, these concerns are reflected and picked up upon in the relationships between small objects and enormous gestures.  My own practise of Buddhist Kum Nye Meditation similarly reflects this moving between the small, slow and micro movements to the huge expansive and all encompassing.